Skip to content
The Brave One: Speaking Out About Mental Health

Written by Cliff Newell of the Lake Oswego Review

Anna Putnam is on her way back from bipolar disorder 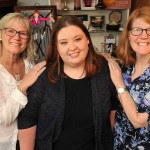 Anna Putnam will always remember the day her mind snapped.

“I remember exactly where I was and when,” Putnam says. “I was watching the Oregon vs. Oregon State Civil War football game on TV in December 2010. Some switch flipped in my brain, and I went into a deeper and deeper tailspin.”

It was the beginning of a long ordeal for Putnam, who was once considered a nanoscientist of immense potential. After she earned her bachelor’s in chemical engineering from Oregon State University, some of the finest graduate schools in the country came calling – including Stanford, where Putnam accepted a full-ride scholarship easily worth half a million dollars.

And then Putnam’s life came to a screeching halt. She was stricken with bipolar disorder, which scrambled her mind and took it to places she says most people cannot even imagine. Her moods swung way too high, then way too low.

REVIEW PHOTO: VERN UYETAKE – Anna Putnam says she loves selling and creating cards and receiving high praise for her work, but she acknowledges that it took a long time to get to this point. I never had the stability to focus on making a business with cards until last year, she says.

The highs could be exhilarating, making her “insanely happy” and even lifting her to higher levels of creativity, but “the highs were the dangerous and main part of my illness,” Putnam says. Her depressions were soul-crushing, but her manias were addictive and even more threatening to her mental health.

Putnam was placed in mental hospitals, where she suffered physical abuse. She had run-ins with the law. She was even homeless for a summer. A life of great potential was on the verge of turning into tragedy.

“I stood a the mouth of hell,” she says.

But today, the brave young woman is on the comeback trail. She has been able to stay out of hospitals for the past 18 months, and she is regaining her creativity. She is happy, she says, and has achieved peace.

Part of her road to recovery has gone through Lake Oswego. Putnam now makes greeting cards for On a Whim Studios, where owners Deborah Ulrich and Suzanne Buxton gave her a chance to be an artist and businesswoman.

“Anna was our first artist,” Ulrich says. “I love the way she uses five layers of paper and images that create her own style. Her cards have a unique Oregon feel to them. Suzie and I have been so impressed with Anna’s spirit. She has worked so hard to make her product a success.”

“I like the layeredness of her cards,” says Buxton, herself an accomplished artist. “The images she picks convey what the cards mean. I’m a person who finds it hard to verbalize what I think on a card, but Anna’s cards do that for me.”

Putnam says she loves selling and creating cards and receiving high praise for her work, but she acknowledges that it took a long time to get to this point.

“I never had the stability to focus on making a business with cards until last year,” she says.

Her life’s journey has been full of great suffering, pain and loss, but now things are finally on an even keel.

“I have a deep sense of contentment and I’ve never had that before,” Putnam says. “I’m happier than I’ve ever been.”

While she was growing up in Happy Valley, the sky seemed to be the limit for Putnam. From the earliest age, she showed remarkable intelligence.

“Anna was unique to raise. She was brilliant,” says her mother, Lanie Putnam. “It was really exciting raising such a brilliant child. Anna’s teachers were always thanking us.”

However, a few trouble signs started showing up when Anna reached junior high.

“Her brain was going to fast,” Lanie Putnam says. “She would come home and be so anxious if she got a grade less than an A, and she would hide under the bed. My husband Todd and I would go to parent-teacher conferences and the teachers would say, ‘I just want to thank you for raising such an amazing child.’ But at home, she would show her angst to us.”

Still, at this point nothing was slowing Putnam’s rise in the academic world. She was valedictorian of Clackamas High School, where her picture is still on display in the school trophy case. Some of the nation’s best engineering schools, such as Harvey Mudd College in Southern California, offered her scholarships, but she chose to attend the honors college at Oregon State University.

Her future looked astonishing. OSU’s Terra Magazine took note with a profile on Putnam and her work in nanotechnology. Her work on a revolutionary battery – lighter, tougher and more durable, for use by the U.S. military – put her “at the front edge of innovation.” Other students worked under her supervision, and even her professors were amazed by her.

After graduating from OSU, she was once again pursued by the finest schools. She chose Stanford. and then her great mind revolted.

Putnam’s life was turned inside out by her bipolar disorder, and confusion reigned – especially since her disorder was not diagnosed. Eventually, she felt compelled to leave Stanford and return home.

In Oregon, Putnam continued to struggle with the loss of her mental health. She endured mistreatment in mental hospitals, she says, and medications that failed and only made her feel numb. During her manias, her brain would “fire 1,000 times faster” than normal. Her life of extremes was wearing out her brain, spirit and soul.

REVIEW PHOTO: VERN UYETAKE – Lanie Putnam (right) says the period when her daughter was homeless was the most excruciating summer of our lives. Anna’s recovery from bipolar disorder, she says, is a miracle.

“We loved her to death,” Lanie Putnam says. But they could not understand why she had given up her scholarship to Stanford or why her behavior had become so drastically different. The Putnams thought Anna was just making the wrong choices.

“She wasn’t sleeping, she would step in front of moving vehicles, she would talk nonstop in her room when there was nobody else there. She was doing things that were endangering her,” Lanie Putnam says. “Her brain had gone from brilliant to struggling. She didn’t mind her manias, because they were exhilarating to her. But they were playing havoc on us. In her right mind, she was a loving, caring, generous girl.”

Putnam was also a very stubborn girl, and in her manic frame of mind she refused to take the medication that had been prescribed for her. The repercussions of her manias got worse and worse, causing crisis for the Putnam family in the summer of 2014. It was decided that Anna had to leave home, and she chose to live on the streets. In her state of mind, she was fine with the decision, but her parents were heartbroken.

“Your No. 1 goal is for your child to be safe,” Lanie Putnam says. “Allowing her to live on the streets was the hardest thing we’ve ever done. But you can’t lock Anna in a room.”

Lanie Putnam never broke contact with her child. She would bring her “care packages” with blankets, food, money and other supplies. But “in a few days,” she says, “Anna lost everything.”

The most dreadful thing for Todd and Lanie Putnam was the waiting. But they were also hanging onto hope.

“We’d been waiting at the phone for the next phone call,” Lanie Putnam says. “We knew that at some point, she would be in so much pain that she would have to take her medications. That was the most excruciating summer of our lives.”

“My parents let me stay on the streets and deal with the pain of that until I decided for myself to get help,” Putnam says. “So after a summer of never sleeping in the same place twice, being constantly robbed and even sexually assaulted, I made the decision to get the help I needed.”

Putnam was accepted into a group home in Oregon City operated by Cascadia Behavioral Healthcare, where the staff worked with her to find the proper formula of medication that helped control her dopamine levels, but still let her feel her emotions.

It was there, Putnam says, that she finally realized she was not going through a spiritual transformation and had actually been stricken by a serious mental disorder.

“It takes more than medication to find complete mental peace,” she says. “I spent years working on my inner thought life to obtain the quiet brain I have now. And I have to always work on it to maintain it.”

Mostly, Putnam says, she’s proud of herself for surviving.

“What is so valuable to me is that my suffering showed me how strong I am,” she says. “I now know how well I can handle intense hardship and pain.”

From so much pain has come understanding, she says.

“As soon as my parents heard I had bipolar disorder, they forgave me everything,” Putnam says. “They saw there was a reason for the choices I made, and they were fully there for me the entire struggle. They had to show some tough love to get me to choose to take my medication.”

Lanie Putnam says her daughter’s recovery is a miracle.

“She hasn’t been in a hospital for 18 months and we couldn’t be more thrilled,” she says. “We can tell the difference between true happiness and a mania. Anna hasn’t lost her great mind. The medications have not stifled her ability to think. I’m so encouraged, because this girl carries a lot of love inside her. She does so well at writing and public speaking. I think eventually she could be a mental health advocate.”

Putnam has come out of her ordeal a better, and certainly happier, person. Her perspective on life has undergone a dramatic change.

“As weird as it sounds, I honestly don’t think there are as many people as happy as I am.”

Putnam is now on the way to reclaiming the exciting promise her life once showed, and she has a great desire to tell people how she got out of such a deep, dark place. She wants to give them hope, and to change the way people think about mental illness.

“Society calls it ‘mental illness,'” Putnam says. “But I see it as an extraordinary challenge that carries with it extraordinary possibilities.”

Thank you for contributing to our shared goal of improving the quality of life for all Oregonians.